Who won the Poetry Writing Competition 2013?

Chandigarh Literary Society (CLS) announced the winners of its first poetry writing competition 2013 which was launched in January on 26th April.
Just after Sonia Golani's interaction with the city's literati, the much-awaited results of the Poetry Writing Competition 2013 were announced.
There were 53 entries in English, 20 in Hindi and 3 in Panjabi, Ms. Sumita Mista, President CLS, informed. 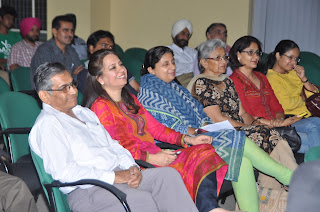 Ms Sumita Misra and Ms Superna Puri, who were two of the three jury members shared the difficult process of sorting out the best poems out of numerous good ones, not without enjoying the insightful diverse treatment to the single theme of "Darkness Before Dawn".
Though not many winners could join the function, their winning poems were receited  with aplomb by Superna.


From amongst contributions in Hindi, first and second prize went to Surbhi Kishore and Ajay Singh Rana respectively.


Our special thanks to English Book Shop and Nando's family restaurant for sponsoring the prizes for the winners of the CLS PWC2013.

Thank You for the special mention, for a banker its recognition enough!!. Do keep organising, maybe one day !!! Congratulations to the winners. Compliments for making us punjus / haryanvis (Chandigarh is essentially this though with a vibrant diferent culture) use our brains creatively!!Dinesh K Kapila

I wish i could take part..

When is the next competition ?