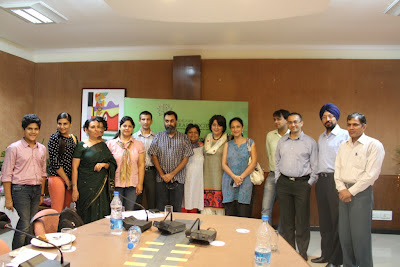 All the six stories were read out by the respective authors to the audience and later the three-member jury comprising city-based noted author Khushwant Singh, writer and journalist Nirupma Dutt, and academician Neel Kamal Puri, spoke about the nuances of writing and appreciating the genre of short-story writing.
The competition involved completing a 1000-word story beginning with the cue, “She was thoroughly enjoying her stroll when a man lying prone on the roadside caught her attention. Fearing the worst, she turned the limp figure over. Her heart leapt a mile when she saw the man’s face…”
Encourage by the response, CLS would be organizing similar competitions to engage and encourage people in creative writing, Sumita Misra informed.

The prizes were sponsored by Nando’s and English Book Shop.
No comments: