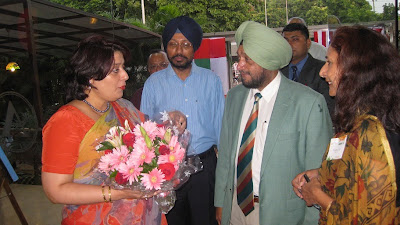 The best tribute that one can pay to our martyrs who fought and laid down their lives for the freedom of our country is by being truthful to oneself, and honest in whatever we do, said Sumita Misra, Chairperson of Chandigarh Literary Society in her inaugural address of the "Beyond August 15" exhibition at Hotel Aquamarine on 22nd August. 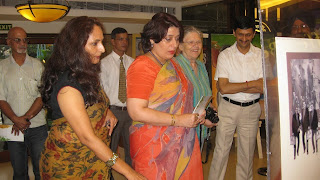 The exhibition and installations curated by our member Ms Neenu Vij of Kadamb Art who had brought together artists from Chandigarh and Delhi to showcase their representation of the India's independence, and how one can continue to sustain it beyond August 15, in collaboration with the Chandigarh Literary Society. 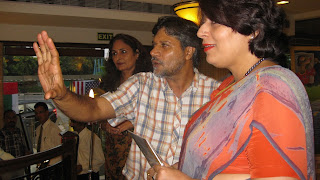 Mrs. Sumita Misra, IAS, Secretary Tourism, Government of Haryana earlier cut the ribbon to formally inaugurate the exhibition.
Those present from CLS included beside the Chairperson herself, Mr Man Mohan Singh Kohli of Hotel Aroma, Vivek Atray, Saguna Jain, CJ Singh, Neenu Vij, Renee Singh, besides several other prominent citizens.
Explaining the concept, the curator Neenu Vij said that 15th August. It is not just a date for any Indian as it is associated with memories of historical importance and personal sacrifices.  It is an admixture of emotional pride, a struggle to behold, dream to yearn for achievements as well as acknowledge ideas to flourish. The independence day has also been moment of sheer pride and eternal bliss, and also gave us an identity as a nation. 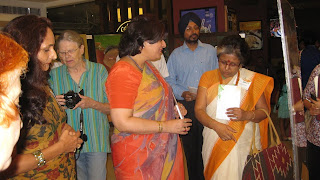 Neenu Vij receited some of the poems that his father had penned for her during her childhood that carried deep learning and message.
Mr. Vivek Atray, IAS, Managing Director, Hartron, complimented Neenu Vij for bringing together the retrospect of such emotions and unique combination of art and literature.
The combination of poetic expression and visual presentation of the idea is to elaborate the fact that the aim of art in any way is to convey a thought, carry a mission and unite people for the same.
Another highlight of the evening was the recital of Rabindranath Tagore's "Ekla chalo re" by city's famous musician Subhash Ghosh followed by 'Raghupati Raghav Raja Ram'.
The participating  artists included Amargeet, Natasha Jaini, Meena Baya,  Vishal Bhuwania from New Delhi, and  Madan Lal, Bheem Malhotra, Alka Kalra, Namita Kohli from Chandigarh.
The exhibition is on view from August 22 to 24 at Hotel Aquamarine.
Our special thanks to Mr. Man Mohan Singh Kohli for providing perfect ambiance and hosting the event with aplomb and personal care.