Take care of your parents when you grow up: Ruskin Bond 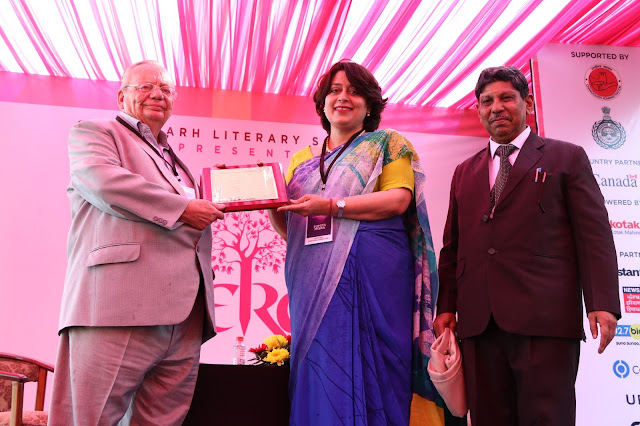 ChChandigarh, 25 November : Hundreds of children from different local schools thronged the sylvan surroundings of Sukhna Lake which formed the backdrop to the 5th edition of the international lit fest, Literati 2017.
\ 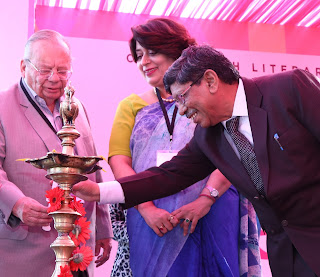 With the Lake Club venue choc-o-block with avid readers and fans of Padamshree Ruskin Bond, the children and the parents alike quizzed the author about his different novels and short stories.
Addressing the children his only advice was that since parents are taking care of you and make you study in good schools, just take care of them when you grow up.

Chandigarh Literary Society conferred on Ruskin Bond its first Lifetime Achievement Award, which comprised of citation and a humble gift of Rs. 2 lakh.
Though born and brought up in India, he was sent back to London in 50s after his schooling, where he worked as well as wrote his first novel at 17, “Room on the Roof” but as soon as he got the advance of 50 pounds from the publisher he took the ticket back to India in 1955;  “I could not live anywhere else in the world than India, which brought me back here.”  Ruskin Bond remarked. 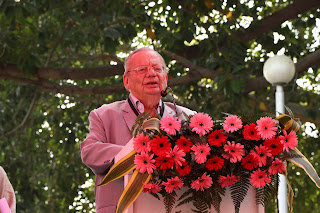 “I identify myself with a lone fox which I saw once in Mussoorie hills in a moonlit night, which inspired me to title my autobiography ‘Lone Fox Dancing’,” he remarked.  “It is all truthful and no fiction, which I might invent in the sequel to this autobiography,” he remarked jocularly.
Sharing the tips for writing in response to a question by a youngster, he said that a writer must respect the language and grammar, write regularly, find a space for solitude in the room or home, read literature, and adopt simple style so that readers can relate to it and enjoy it.
Responding to another question from a student as to whether one could make a career in writing, he said that he writes for the joy of it and he has never looked for fame or fortune.
What would you be had you not been a writer? “I would have either been a sumo wrestler or a football player”, he said laughingly.
He related anecdotes of being mistaken by someone else on lots of occasions, at party, at the airports, and social gatherings, and even associating him with different work of literature by some other authors. 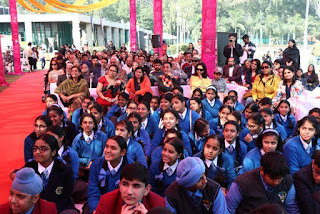 “People can relate to my stories because it is all about people who are real in their character and emotions, but when I run out of the people to write about, I chose animals, and if I run out of animals, I write about ghosts”, Ruskin Bond said.
He implored the budding writers to work for the protection of the environment and to set limit to the urbanization, so that we can preserve it for posterity.
Earlier Dr Sumita Misra, Chairperson of CLS, in her welcome remarks said Literati has gone international with the joining of Canada as the partner country, whose two prominent authors will be featured on Sunday.
Dr Christopher Gibbins, Consul General of Canada was present at the venue throughout the day.


Madhav Kaushik, Vice Chair of CLS said that Literati is the celebration of the divinity and dignity of the written world.