"Anything to Look Hot" by Dr Jas Kohli released

Complimenting Dr Jas Kohli for finding time for his creative pursuits, Vivek Atray said that literary activities in the region on the increase and many of the youngsters, working professionals and housewives are expressing themselves beautifully and sharing it with the world, which is an encouraging trend.

In a writers' life, however, Mr Atray said, that first phase of writing is all about total involvement and daydreaming when you are in the process of writing, and second challenging phase is to find the right publisher, and the last phase is even more tough when one has to market and promote the book to the readers.

He announced that the third edition of CLS Literati shall see over 50 authors from around the country from 6-8 November at the Lake Club.

In a session moderated by another author and life coach, Suditi Jindal, Dr Jas Kohli shared his journey and the four years that he spent in working on his first novel, and commended Srishti Publishing for accepting his work and encouragement.

Dr Kohli also said that he was indebted to Chandigarh Literary Society where in the last year’s Literati he happened to meet many established authors, especially Jerry Pinto, who guided him through the process.

“I have already been playing with the idea of sharing the travails and tribulations of a medical professional; I have lived it all through the protagonist of this novel, a plastic surgeon Dr. Dhruv, whose life’s journey surpasses even a masala movie for humour, drama and action” Dr Kohli shared.

Dr Jas Kohli has used this book to debunk many a myths about cosmetic surgeries, the dangers of falling into the traps of glitzy ads without confirming the credentials, and the book, he feels, will enthrall those who can do Anything to Look Hot. 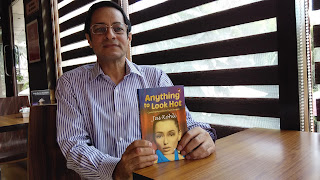 Dr. Kohli read out excerpts from his book how the cosmetic surgeon Dr Dhruv finds himself surrounded by celebrities and movie stars in Mumbai, to tweak their looks.  “When the superstar diva of the past decade doesn’t want to play the hero’s mother on screen, she insists that she be reshaped into the most beautiful woman in the world…by any means.”

The hero finds satisfying the movie stars a different ball game, because every girl wishes to have bee-stung lips, and every guy wants to flaunt a six-pack abdomen without working too hard.

Many of his colleagues from PGI were present amongst the invited audience including his teacher Dr P.S. Chari, former head of plastic surgery in PGI, senior plastic surgeon Dr. VD Singh amongst others.

Dr Jas Kohli is a senior plastic surgeon, in active practice. He received MCh degree in Plastic Surgery from Delhi University in 1998. Starting as a precocious writer, he penned poems and short stories for school and college magazines. Admission in MBBS turned him into a diehard academician, and he all but forgot that there was a fiction writer lurking beneath the load of medical books. He has published a number of scientific papers in his medical career, including two internationally acclaimed ones in the British Journal of Plastic Surgery and also written educational articles in the local newspapers on plastic surgery.

Dr Jas is a member of APSI (Association of Plastic Surgeons of India) and received the APSI best paper presentation award in 1997. After becoming a plastic surgeon, he worked at various centers in India and abroad and came in contact with all shades of characters, from sane to inane. He realized, that to be a successful plastic surgeon, apart from surgical finesse, one also requires a sense of artistry, psychology, fashion and of course, women!

Confessing to be a confused conglomeration of cells, he juggles his time between writing, plastic surgery, astronomy, bird watching and his family comprising his wife and two kids.