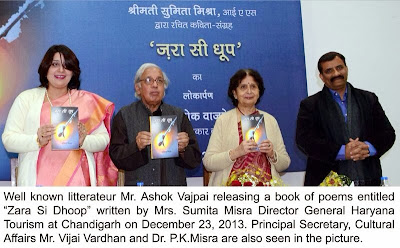 Commending on Sumita's poetic style, noted writer and poet Ashok Vajpeyi remarked that one could see a new spark and a new thought process in her poetry which has a touch of Urdu in her Hindustani typical of Lucknow nuances.
Ashok Vajpeyi kept the audience amused with his wit and humour and remarked that bureaucrats writing poetry has one clear advantage that they go through tremendous challenges and get to see the despair and tribulations of common man which might provide them with inspiration to indulge in creative pursuits but may also at least help them bring some humane touch to the process of governance.
The Advisor to the Administrator Mr K.K. Sharma, Finance Secretary Mr V.K. Singh along with city's gliterati attended the function.
Vijay Vardhan in his baritone voice recited some of Sumita Misra's poetry including 'Mujhe Chahiye', "Achha Hai', 'Mera Hissa', 'Chalo' etc, which according to him, depicted varied shades of life and in a way depicted tinge of despondency, but had portrayed moments of joy too.
Her mother, Dr. P.K. Misra, recalling her journey from childhood recalled her late father's word who always inspired her with the words, "sky is the limit for you", which she has proved time and again.
Sumita Misra is an acclaimed poet and has earlier published two books, one of poems in English titled ‘A Life of Light’ which has a foreword by Sh. Khushwant Singh, and another book of poems in Hindi titled ‘Kadmon ki Laya’.
Sumita Misra who is currently posted as Secretary & Director General for Haryana Tourism & Hospitality and is the Managing Director of Haryana Tourism Corporation, but has deep interest in literature, and has been instrumental in organizing highly successful Chandigarh Lit Fest – Literati – in November 2013.
Born and brought up in Lucknow, she had an illustrious academic career having topped both
Born in Lucknow to doctor parents, Sumita Misra did her postgraduation in Economics from Lucknow University and had been a gold medalist and topper both in her BA and MA, as well as in Indian Administrative Service which she joined in 1990, as a topper and 10th position holder in her batch amongst women.
She has served the Haryana government on various positions for last 23 years as managing director/executive administrator/special secretary in the areas of education, rural industries, renewable energy, power, irrigation, women and child development.
She also did short-term courses in public policy from Harvard University, USA & Royal Institute of Public Administration, London, IIM Ahmedabad & IIM Bangalore.
She is receipient of Haryana State Gold Medal for outstanding work for Red Cross and Child Welfare activities.
She had been instrumental in getting Haryana three National Awards from the President of India Smt. Pratibha Devi Singh Patil for outstanding work in Renewable Energy in 2007. Under her leadership Haryana was the National Award winner among all States for Energy Conservation for three years in a row, which is a record.