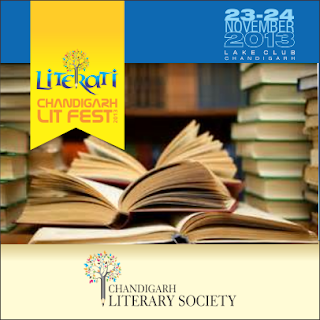 With an amazing line-up of internationally renowned authors, exclusive performances by specially commissioned artists, interspersed with topical debates and discussions across varied literary genres, the city shall be the destination of choice for literature lovers, informed Ms. Sumita Misra, Chairperson of CLS addressing the media here today.

The Literati would have sessions for English, Hindi and Panjabi literature with some interesting sessions like ‘Exotica is the New Erotica’, ‘The Four Letter Words: All Betweeen Love & Hate’, ‘Women and the Paradox of the Modernity’, ‘Dissent, Discourse & Diaspora’, ‘Religion and Politics: Oxygen or Position?’, to name just a few.

Several book launches are also planned during Literati, including ‘Helium’ by Jaspreet Singh, and Manisha Gangahar’s ‘Kashmir’s Narratives of Conflict’.

The Team Literati2013 also unveiled the website (www.chandigarhliterati.com) which would keep the literary-connoisseurs informed about the programme as they unfold during the event.
“We are also registering volunteers from the city who would take care of various logistics support for the event, though we have already received an encouraging response from the students,” informed Mr Vivek Atray.

The sprawling lakeside lawns of Lake Club will be transformed to a literary village with bookstalls, paintings, photographs and handicrafts display, live artists at work, coffee corners, and food stalls.

Noted Hindi author Mr. Madhav Kaushik, Secretary of CLS said that this literary festival is celebration of creativity to encourage and inspire young writers in this region and this annual event shall grow into bigger format in future.

Since its formation in 2012, CLS has activated the Chandigarh literary scene by hosting some of the celebrated authors including Anupam Kher, Navtej Sarna, Pavan Varma, Ketan Bhagat, Yousuf Saeed to name just a few, besides organizing various workshops for budding authors, and short-story and poetry writing competitions, added Ms Misra.

This shall be an annual signature event of CLS and the next one would be in much larger dimensions, she informed.

Good Job keep it up