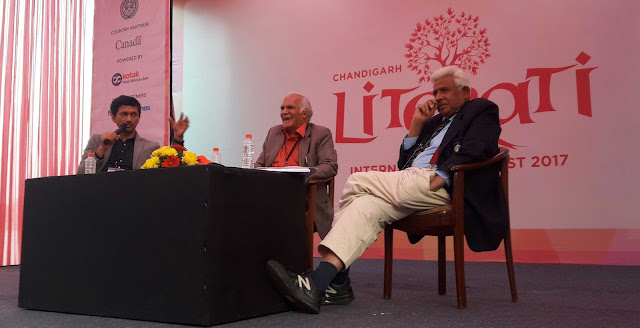 In one of the afternoon sessions on “Sarkari Sagas: Civil and Uncivil” which saw Ram S Varma, with another retired civil servant and author Robin Gupta with Vivek Atray, another civil servant who recently resigned from Haryana government to pursue his creative dreams, the varied aspects of bureaucracy and working in the government were unveiled.
Published by Rupa, the book is about Ram Varma’s journey with the three powerful chief ministers of Haryana over his three decades of chequered career that saw many ups and downs.
“I owe my literary journey to Ch Bhajan Lal, erstwhile chief minister of Haryana, who posted me to non-descript post with no work as an OSD as punishment for not issuing national permit to his favourite transporters, leaving me with plenty of time to write middles for a local daily,” he said.
Ram Varma was all praise for the three chief ministers of Haryana who transformed the state from a improvished one into an economically flourishing one. 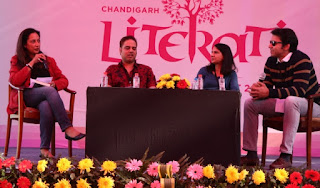 Robin Gupta, in his “Memoirs of an unrepentant civil servant” is more critical of the political interferences and critical degradation of the services and described his memoirs as a “sad book” for his inability to bring about the changes and reforms that he wanted to prevent bureaucracy from becoming political robots.
“My book,” he remarked, “is a tribute to about 5000 civil courts who kept India together despite country’s disparities.” 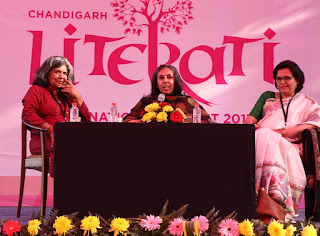 Prolific writer and author of famous nove, “Teenage Diaries” Saurabh Sharma, much-acclaimed poetess and author of “First Fire” Archana Sahni,  and young entrepreneur with author of number of books with latest being “Harappa” Vineet Bajpai explored the nuances of poetry and prose with Saguna Jain.
Author of “Mr and Mrs Jinnah”Sheela Reddy and famous critic and historian, and an activist popularizing Hindi and Urdu literature, Rakshanda Jalil, explored with Suparna-Saraswati Puri the connect between the politics, literature, and culture.
The first day ended with the session on “Here and Now” that focused on how the empowered women of the city, Dr Sumita Misra, Neel Kamal Puri, Vandhana Shukla with Chetna Keer talked about the young women writers.  Neel Kamal Puri said that women writers are more liberated today with good equation and understanding of other gender, while Dr Sumita Misra emphasized the need for self-belief and confidence which has an empowering effect on young writers.  Vandana Shukla asked the young writers on  clarity of their thoughts as to what they want out of life.