Chandigarh Literary Society (CLS) organized the launch of two books in the city on 5th May. 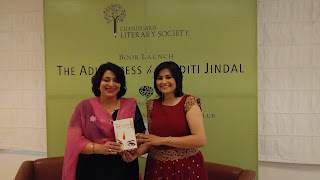 Ms Sumita Misra, Chairperson of CLS informed that the second novel of corporate trainer and life coach, Suditi Jindal, The Adulteress, published by Grapevine India Publishers, was released at the Chandigarh Golf Club.
Suditi Jindal informed that ‘The Adulteress’  (priced Rs.149) is the story of a woman undergoing midlife crisis and her journey to self-realisation amidst conflicting human emotions.
The book was released by CLS Chairperson Sumita Misra, along with family and friends of Suditi. 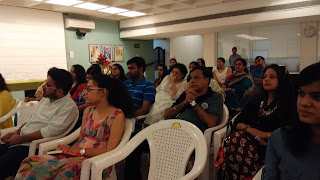 The author is fiercely hopeful that the book will encourage the readers to submit to ‘Divine Will’ or love to unravel the mysteries of their lives – analogous with her journey to the higher self while writing The Adulteress.
Suditi began her journey as a writer at the young age of 9 years and while still in school got an award from Hindi Academy Delhi, and in 2012, under Snab Publishers  her debut novel ‘Grow Up Moon!’ saw the light of the day.
Suditi regards herself as a sponge that soaks up the good, the bad and the ugly of life around her and then weaves simple tales with deeper underlying messages.
The second book launch was debut novel, “The Lamentations of a Sombre Sky”, written by a young man, Manan Kapoor, who originally hails from Shimla but has made the city his home, at the Whistling Duck restaurant.
Dr. Rana Nayar, Head of the Department of  English Literature, Panjab University, explored the nuances and inspiration behind writing of this novel, and Manan revealed that the idea germinated from the album, Ghost Reveries by Opeth, which is a story of a man’s turmoil after committing an unconscionable act, and over a period of next two-and-a-half years, the novel emerged.
The Lamentations of a Sombre Sky, published by Frog Books, is the story of a skirmish with life and the perseverance in the dark times.  (250 pages, Rs.250)


The Lamentations of a Sombre Sky is about a phenomena that every individual experiences at least once during their lifetime – loss, said Manan. No matter what you’ve seen, experienced, fought, you will always feel it caresses you gently, at every point of your life. The basic purpose of writing this novel was to elaborate that loss is a downward spiral that never ends. The moments when you think you’ve achieved salvation are like words in one of those awfully long sentences written by Proust or Faulkner – another word follows, always, Manan added.