Mystery of the Girl in Blue Skirt Unveiled 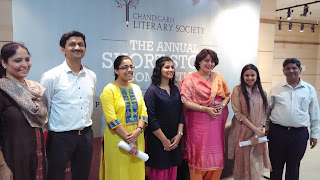 The mystery is finally over. There were 135 versions that people from as far as New Delhi and Noida sent to us for CLS Annual Story Writing Competition that was announced in May.

The first prize went to Tript Kaur, who travelled all the way from Delhi to receive the prize.  The second winner was Panchkula SDM, Radhika Singh, and the third winner was Srishti Sood.  The jury had also shortlisted three other stories for special mention, written by Pankaj Sharma of Ambala, whose sister came to receive the prize, J.S. Ghuman, and Sherein Bansal. 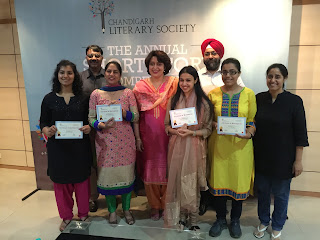 The short-stories were adjudged by the panel of judges which comprised former chairperson of Chandigarh Sahitya Akademi Dr Manju Jaidka and Chairperson of Deptt of English and Cultural Studies, Panjab University, Prof. Pratibha Nagpal.

Sumita Misra handed over to the winners prizes gifted by Capital Book Depot of Chandigarh along with the certificate.

CLS Chairperson Sumita Misra informed that there was an overwhelming response again this year with 135 entries to the competition that involved completing a short-story from an opening cue, “He was sure that it was her...almost! He walked briskly down the pavement, overtaking several fellow pedestrians.  She wore a white top and a flowing blue skirt. Her hair flew tantalisingly behind her as it used to all those years ago..." 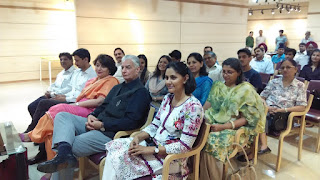 The judges had the tough time reading each story, evaluating it and finally deciding on the winners, said Dr Puneet Kapoor who coordinated the competition.

Sumita Misra informed that the 3rd edition of Chandigarh Literary Society’s signature annual event, Literati 2015, will be held on 6-8 November at the Chandigarh Lake Club in which over 50 noted authors from around the country are participating with book releases, on-the-spot competitions, and exciting cultural evening programmes.