Kamla K. Kapur was born and raised in India and studied in the US. For 40 years  her writing has included plays, novels, poetry, and reimaging India spiritual writings. Her new book, The Singing Guru, on the legends of Guru Nanak, is forthcoming from Mandala in 2015.

Her highly praised books of poetry are As a Fountain in a Garden (Tarang Press, 2005) and Radha Sings (Dark  Child Press, 1987).

On 4th May, the Hindi rendition of 'Kamia', translated and directed by Padmashri Ram Gopal Bajaj, was staged at National Centre for Performing Arts (NCPA) at Mumbai, which she attended. 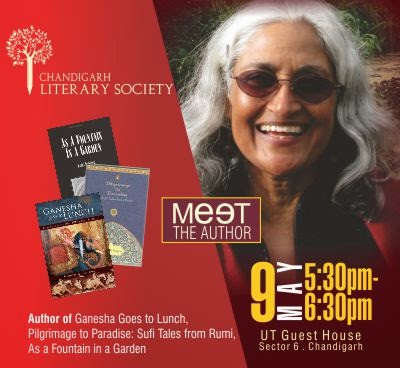 Her bi-lingual play, The Curlew’s Cry, was produced by Yatrik, New Delhi; Clytemnestra was produced in a Panjabi translation by The Company, Chandigarh.

The New Mexico Arts Division selected her as the Playwright in Residence for two years in 1985.

Kapur was a semi-finalist for the Nimrod/Hardman Pablo Neruda Poetry Prize competition in 2006, and three of her poems were published in Nimrod, International Journal of Poetry and Prose (2007).

Five of Ms. Kapur’s short stories were published in Parabola, journal of Myth, Tradition, and the Search for Meaning (New York), two in The Inner Journey, (Parabola Anthology Series 2007), and one in The Sun (USA, December 2012)

Ms. Kapur divides her time living in the remote Himalayas and in San Diego, California, with her husband, the artist and author Payson R. Stevens.

Kamla K. Kapur would be addressing Chandigarh Literary Society (CLS) at Meet the Author programme on Friday, 9th May 2014 at 5:30pm at UT Guest House, Sector 6, Chandigarh. You're invited.