What the reviewers are saying about Chanakya's New Manifesto 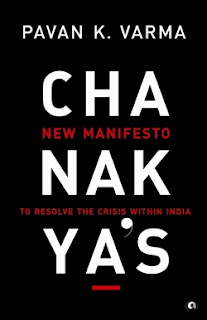 Mr. Pavan Varma's new book, Chanakya's New Manifesto: To Resolve the Crisis Within India, is a journey through the ideological terrain of modern India striving to streamline governance, hone the democratic apparatus to make it more inclusive, purge corruption and install foolproof security—key areas that continue to throw up fresh challenges 66 years after Independence.'—Hindustan Times

'Simple, lucid and easy for the young to relate to, [Pavan] Varma presents his prescription for change in the form of a political manifesto—a point-wise analysis of the problems and their solutions.'—Zee News

'A thoughtful analysis of India in its current state for the inquisitive youth who believe in redressal and redemption.'—The Times of India

'Chanakya famously strategized to overthrow the corrupt Dhana Nanda, ruler of Pataliputra, and replace him with Chandragupta who eliminated misgovernance and ruled what was the first pan-Indian empire. Unlike Chanakya, [Pavan] Varma does not suggest an overthrow of the system. Varma's New Manifesto (even if he modestly calls it Chanakya's) is full of ideas within the constitutional framework of India.'—India Today

Mr. Pavan Varma would be in Chandigarh on 29th March at UT Guest House, Sector 6, Chandigarh at 5pm. Will you be there?

Due to my work related to Printing & Publication which is to be completed before 31st March,'13 it will not be possible for me to attend the event. However, I would like to have a copy of the Book by Mr. Pavan Varma. Please arrange to send it by VPP to my following address: